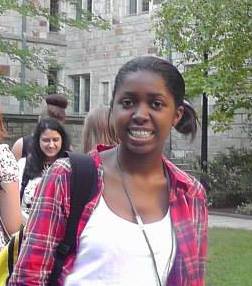 My name is Chloe Bingham, I’m 19 and I’m an aspiring Director and I’m currently in my first year at the University of Glasgow studying Film and Television. I took a gap year from 2014-2015 and I worked as an apprentice for the 4Talent team at Channel 4,my job involved helping shortlist and recruit for all of the Channel 4 entry-level talent schemes such as The Graduate Programme, Work Experience, Apprenticeships etc and I also worked on the ‘C4 Pop Up’ scheme where I travelled across the U.K and helped host events for new talent who wished to break into the media. During my gap year I also sat on the BAFTA Youth Board and prior to this I was a Young Reporter for the youth film charity, Into Film, I attended red carpet events such as the BAFTAs, which I attended in 2013, and I interviewed talent. You can watch my interview at the Selma press junket last year here.

I am an aspiring Film Director (here’s my first short film):

and I am also a comper and this is my blog where I explain how you too can start comping. What is a comper you ask? A comper is someone who regularly enters competitions as a hobby, there are thousands of UK ‘compers’ and there are many free competition websites where you can find and enter competitions: Loquax, MSE Competitions, The Prize Finder and Di Coke’s superluckyme blog just to name a few.

This blog will focus on my life as a student comper and it in I will do my best to explain how to get into comping, what works for me and also offer my top tips. I’ll also use it to keep track of everything I’ve won.

I’ve been entering competitions on and off ever since I was 11, I first caught the comping bug after winning the Silentnight Book at Bedtime Short Story competition back in August 2008 (my first ever win). The competition required 7-12 year olds to write a my first bedtime story for younger children featuring Silentnight’s two mascots, the Hippo and the Duck. I wrote a short story called ‘The Sunless Forest’ about the Sun falling down and all of the animals working together to put it back up again. My entry won 1st place and I won a two-night stay at The Silentnight Alton Towers suite and Ultimate Fast Track tickets for me and my family. My story was also published and I had a book launch at the Waterstones, Piccadilly, and anyone who bought the Silentnight ‘My First Bed’ received a free copy of it for the next year and in addition I received 20 free copies for my friends and family. Less than a year later I won the under 14 category in The Times Bupa Great North Run Short Story competition. The competition required entrants to write a short story about any sport. I wrote a short story about a girl who runs a marathon in memory of her dad who used to be her running partner. I won an Asus netbook, a £250 cheque, a night’s stay at The Hilton Gateshead hotel and I was also invited to a Sports Gala and my award was presented to me live on Sky Sports. I was quite surprised to find out I’d won both competitions especially as I’d been told there was over 1000 entries in the latter.

I hadn’t comped for a good few years and them last year August I decided to get back into it in order to try and win some things for university. I am delighted to say that it paid off as in September last year I was delighted to find out I was the winner of the Currys & PC World #WINYOURFEES competition and had won £10,000 to cover my fees and a student technology bundle. You can read about that here.

So anyway that’s me, if you’d like to keep updated with what I’ve been getting up to than make sure you subscribe in order to get a notification every time I post.